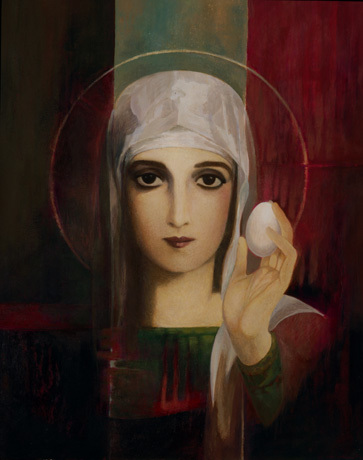 Today we celebrate Mary Magdalene and in the Gospel reading chosen for this Saint’s day we see Mary find the empty tomb on the first Easter morning, the morning of the resurrection of Jesus Christ.  Importantly, she is the first disciple to see the empty tomb.  After she tells two other disciples of what has happened, and after they come and witness the empty tomb and after they leave once again, then Mary has an encounter with two angles who ask why she is weeping.  In complete despair she says. "They have taken away my Lord”, and then she turns around, and although she does not recognize him right away, Mary Magdalene becomes the first disciple, the first human being to see the resurrected Jesus.  She becomes the first person to see the glory of the Lord.

I have said before, but I think even then I may have underestimated the staggering significance of Mary Magdalene being the first person to see the risen Jesus.  In her day women and children had no legal, no economic, no cultural and no social standing.  Women and children were considered the property of the men they were married to or the property of the men they were born to.  If a woman became a widow and could not go back to her family or a child became am orphan and was not taken in by one of their uncles their prospect for survival was short-lived, grim and doubtful.  Women could not testify in legal proceedings, unless expressly ordered to do so, and as such their testimony was not trusted or valued.  If you were writing a true historical account in the first century ancient Israel you would not include a woman’s evidence to support the accuracy of your story because her corroboration of the events would not hold water.  Moreover, if you were writing a true historical account at this time you would most certainly not rely upon a woman as the sole witness to an important matter because she would not have the standing in the community to be properly believed.  It would be as though the event itself did not or could not have happened.

Yet, in all four Gospels, all four, Mary Magdalene is the first to witness the empty Tomb and the first to see or recognize that Jesus was risen from the dead.  I can think of only two reasons why this would be the case, given what I have just said about a woman as a witness to significant historical events – and the two reasons are very interrelated.  First, she is a witness because that is, more or less, the way the story happened.  Two, that is the way God intended the story to happen.  If this is the case the question then very quickly becomes why?  Given all the givens of the situation why choose a woman and, why choose Mary Magdalene?

To help answer that question I need to advance the conversation here about two thousand years and talk about a man and his message that are very close to my heart and I am sure close to many of your hearts as well.  On the evening of April 3, 1968 Dr Martin Luther King Jr. gave a speech at a church in Memphis Tennessee later called the “I’ve Been To The Mountain Top” address.  It was vintage Martin Luther King oratory.  Well written, expertly delivered and full of emotion, passion and hope.  I would like to now briefly share with you the conclusion to that speech.  Before I read it though, it is important to remember that this was his last speech.  The very next day Dr King would be assassinated and his earthly voice tragically silenced forever.  Here is what he said that night.

Well, I don't know what will happen now. We've got some difficult days ahead. But it doesn't matter with me now. Because I've been to the mountaintop. And I don't mind.  Like anybody, I would like to live a long life.  Longevity has its place. But I'm not concerned about that now.  I just want to do God's will. And He's allowed me to go up to the mountain.  And I've looked over.  And I've seen the promised land.  I may not get there with you.  But I want you to know tonight, that we, as a people, will get to the Promised Land.  And I'm happy, tonight. I'm not worried about anything.  I'm not fearing any man.  Mine eyes have seen the glory of the coming of the Lord.”

I don’t know about you, but every time I hear or read that part of that speech I cannot help but think he somehow knew in some way what was going to happen to him.  “I may not get there with you”, he said and indeed he did not.  Had he lived Dr. Martin Luther King Jr. would have been 79 when President Barak Obama was elected into office.  Surely he would have been there and can you imagine what sort of speech he would have given.

However, the reason why I bring up this speech is because of the very last words Dr King says publically.  These are the last words, the last words the world heard from this monumental figure of social justice, peace and hope.  He says, “Mine eyes have seen the glory of the coming of the Lord”.  Yes, it is of course a line of lyric from the Battle Hymn of the Republic, but they are the words Dr King leaves us with. “Mine eyes have seen the glory of the coming of the Lord”.  And I am sure he had seen just that.  I am sure that in his life of turmoil, struggle and hostility he had at times seen the glory of God at work, he had seen the glory of God making a difference, he had witnessed the glory of God triumphant.  That is what I am sure kept him going, it is what kept him inspired to make his world a better place for all people.  He had been witness to the impossible made possible by adhering to a program of non-violent resistance in the face of oppression and injustice, and by a deep trust that God was walking with him along the way.  I would argue he had been witness to the glory of the Lord in a slightly different way but no less significant than Mary Magdalene.

We are now back two thousand years ago at the empty tomb. Jesus speaks to Mary Magdalene and she recognizes her risen Lord.  I ask the question once again.  Why, given all the givens of society at that time would a woman be chosen to encounter the resurrected Jesus?  I think in part for the same reason that the birth of Jesus was announced to the shepherds.  They were poor and on the margins of their society.  Who would believe them? The point was not purely belief for the sake of belief.  The point was not to broadcast the coming of the Lord to the widest audience possible.  The point God was making was that Jesus was to be a saviour first to those who needed it most of all.  I believe Jesus appeared to Mary Magdalene first and chose her to deliver the message to the disciples because she was the one who was tending the tomb, she was the one who was in despair and crying at the supposed loss of the body of Jesus, she was the one chosen in part I believe because she was a woman, and the point God was making was that the risen Christ was to be now and forevermore the saviour to those who needed it most of all.

And very much related to this I strongly believe that God continually uses those whom you might not expect to deliver messages that will change the world and make the world a better place.  Jesus sends Mary Magdalene to tell the other disciples that He is risen and Mary tells them and the history of earth is changed.  It is the news from the mouth of Mary that will send the disciples out into the world proclaiming the Gospel, and that news will in time produce Christianity and change and help and transform and save countless lives.  In a similar way God chose a young African American living in the Deep South in the 1950’s, a man who suffered from depression his whole life and would profoundly question his faith all the way through seminary school, to start a message of love in the face of hatred, to start a movement of acceptance in the face of discrimination and help lead a nation and the world to the dream of equality and peace and justice for all.

Today we remember and celebrate Mary Magdalene.  As far as we know she was an unassuming yet very loyal and courageous disciple of Christ.  She was the only disciple to see Jesus through his death, to see him buried and of course to see him resurrected.  The fourth century theologian Augustine called her “the Apostle to the Apostle’s”.  As far as we know she was a single woman in a world hostile to woman in general and vigorously antagonistic to single women in particular.  What we can say with some clarity is that she loved Jesus.  The scene at the tomb proves that.  This woman who was in utter anguish over the loss of Jesus’ body is greeted by the risen Christ and it becomes her duty to inform the others that she has seen the coming of the glory of the Lord.  I am continually struck by the bold and brazen plans of God to lift up those who have been pushed down so low, to place on center stage those who have been profoundly marginalized, and to give a true and lasting hope to those who need it most of all.  Today we recognize Mary Magdalene, but we also thank God for all those women and children and men who have in their own way - and with God’s help - have struggled to make this world a better place and who in so doing have genuinely been able to say, “Mine eyes have seen the coming of the glory of the Lord”.  Amen.