The Greatness Of Small Places 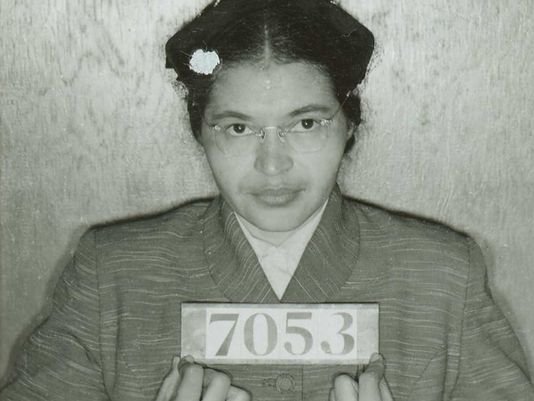 On October 2nd, 1869 in Porbandar India a baby boy was born.  His parents named him Mohandas and his family name was Gandhi.  He would grow up to lead a movement of nonviolent resistance and civil disobedience against violent repression and social injustice.  The Indian people called him Mahatma, which means Great Soul, and Mahatma Gandhi became an important visionary for the idea of social justice through peaceful means in the twentieth century.  In 1913 in Tuskegee Alabama James and Leona McCauley said hello to their new baby girl for the first time. They named her Rosa, and forty-two years later in Montgomery, Alabama their daughter, now named Rosa Parks, set into motion the American civil rights movement by her peaceful yet courageous act of defiance in refusing to give up her bus seat to a white passenger.

The obvious point of comparison between these two is that they were both towering figures for the cause of social justice in modern history.  But one aspect of both their stories that fascinates me is the modest nature of their beginnings. With all due respect to those who were born there, Porbandar India and Tuskegee Alabama do not immediately come to mind as pivotal centers of human confluence where one would expect great leaders to come from.  Surely the story would have been better if Gandhi were from Calcutta or Delhi.  Wouldn’t Rosa Park’s persona have been magnified had she been born and raised in New York or Los Angeles or, at the very least, Atlanta?  History tells us over and over again, however, that this is not necessarily true; great people can and often do come from small places, from humble beginnings.

But what if you were creating a story about God coming into the world?  How would you describe how it should happen?  If I were given that task I would make God come through the clouds with great heavenly fanfare accompanied by a whole host of angles.  God would take some sort of human form so that we could communicate with each other and if it had to happen at one place I would put the event in one of the world’s great cities.  It just makes sense to do it that way.  God, the creator of the universe, certainly deserves no less.  Surely God deserves and would expect a blockbuster Hollywood entrance.

But this is very different from the account we get from the gospel writers concerning the coming of Jesus into the world.  He was conceived to a couple of teenage peasants who were not yet married, and this fact brought rumor and innuendo of infidelity and illegitimacy.  He was born as a helpless infant in an open-air barn.  His cradle was a water trough for animals.  He grew up in a small, backwater village and as far as we know had no formal education except for learning the trade of carpentry from his father and learning about God from the local Synagogue.   Archeological evidence has proven the existence of this little town of Nazareth, and we know that at the time of Jesus it would have had about five hundred inhabitants and that most of them would have been members of one large extended family.  Therefore all the people of Nazareth would have known Jesus personally and to most of them He would have been known quite well.  They would have said in a rather matter of fact fashion about Him, “That’s Jesus, son of Joseph and Mary”.

And then Jesus, as a man, leaves town and begins His itinerant ministry.  Soon after He returns to Nazareth and does what He has been doing on the road.  He teaches in the synagogue that He has a message from God for all to hear because God, His Father, sent Him to preach it.  He touches the ill and the infirm and they are healed.  And the people of Nazareth say to themselves, “Who does he think he is?  He’s Jesus, the son of Joseph and Mary.  He’s nothing special”.  “His brother’s and sisters are right here with us and they’re nothing special either.  What does he think he is doing”?

For me this gospel passage raises two important issues.  The first is the very humanness of the story of Jesus.  As I mentioned last week, many theologians have pondered that Jesus was some heavenly presence and had no real connection to human life, as we know it.  Many others have said that Jesus is no more than the figment of an overactive, early Christian imagination.  I have also mentioned before that I have struggled with the question of who Christ really was and is, but I can say that the theories of Jesus being an ethereal heavenly body or an imaginary figure just don’t hold water when juxtaposed against the Gospel stories.   To me these stories are too full of human foibles to be ethereal and too full of a gritty, worldly truth to be the product of pure imagination.  These stories have the blood and guts and pain of reality to me.  In this story members of His own family reject Jesus, or at least question what He is doing.

That rejection, while of course unfortunate and likely personally hurtful, nevertheless seems authentically human to me.  I imagine what it must have been like for Rosa Parks and her family in the days following her action in Montgomery.  I obviously do not know, but I would imagine she and her husband would have had more than one heart to heart discussion that would have had questions like these.  “What if you get fired, we can’t afford for you to loose your job”.  “What about the kids”?  “Why do you have to do this, why can’t someone else take the lead”?  “You know how crazy some of these people are, what if we get Killed”?  What will happen to the kids”?  That’s very real, that’s blood and guts and pain sort of real.  And therefore I think it is important to never loose sight of the humanness found in the gospel stories.  We may differ in our in how we interpret these stories, but I believe we should remember that Jesus of Nazareth, son of Mary, did say that God loves us all, that God expects us to love each other without exception and that this carpenter, born in humble circumstances, died for these beliefs so that this message may not be lost, but rather passed on to all of us now and for all time.

The second issue this gospel passage raises for me is faith.  For me a crucial component of faith is the ability and willingness to accept God’s grace.  The people of Jesus’ hometown could not accept His wisdom or His healing ministry.  To them He was nothing out of the ordinary, so how could they expect Him to do the extraordinary?  But when He did do something miraculous they immediately rejected Him.  They could not accept the love given to them by God because the person giving it to them was, in their eyes, plain and nothing special.  There was no fanfare, no parting of the clouds, no heavenly host of angels, and no Hollywood blockbuster.  It was just Jesus of Nazareth and as Nathaniel said in the Gospel of John, “Can anything good come out of Nazareth”?

Let me explain what I mean by the willingness to accept God’s grace as an important component of faith.  In Matthew 18:3 – Jesus says, in effect, unless you become like children, you will never understand the love of God.  I mentioned this once before, albeit I a different context, but I think many who read this passage try to think of the qualities of children to which Jesus must be referring.  They might say, “Well, children are innocent, pure, loving, nonjudgmental, playful and kind to others”.  I would agree that children have some of these qualities some of the time, but having been a teacher for seventeen years, I can also attest to the fact that children can at times be mean, ill-mannered, insensitive, a little devious, self absorbed and occasionally completely unreasonable.  My understanding of Jesus may be incomplete, but I am pretty sure He was not referring to these qualities when saying we should act like children.  The characteristic I believe he had in mind was one that all children I have ever met possess, and unfortunately one that many adults seem to have lost.  It is the ability to accept grace without hesitation.  If you come up to a child and offer them an amazing gift, they will take it even if though they know they don’t deserve it.  They will accept it with wide-open eyes and wide-open arms and will be glad for it.

Adults in the same situation will likely have a different response.  They might be suspicious and ask, ”Why are you doing this, what do you expect of me in return”?  Or, and I think more likely, the adult will feel unworthy of this free and amazing and unexpected gift and would feel guilty about taking it.  For me this was one of the hardest parts of my conversion as an adult.  I had difficulty accepting that the God of creation, the God that fashioned life, love and everything in between cared about me personally.  I asked myself what on earth had I done to deserve this?  And then I realized the only ticket you need to enter the club we might call ‘the loved children of God’, is to be born.  God’s love is there for you and for me and it is there without reservation and for all time, I guarantee it.

But I think the gospel passage today does remind us that in order to make God’s loving relationship with us complete we do have to accept that love.  We have to be willing to receive God’s grace for us.  An image I like for this is that we are in a sailboat on the sea and God is the wind.  When we hoist the sail up the mast and let the wind catch it, a power and a direction and a wonder is given to us that we otherwise would not have experienced.  But we do have to hoist the sail; we do have to leave the harbour.  That is our faith in action.

Perhaps this is why so many great people have come from small places.  They accepted the love of God and left the safety of the harbour and with the help of God set a course for truth, justice, peace and love.  They left Porbandar, Tuskegee and Nazareth and in their own way changed the world.  I believe God is calling all of us with love to accept that love and, in our own little way, to do the same. Amen.