Who Do You Say That I Am? 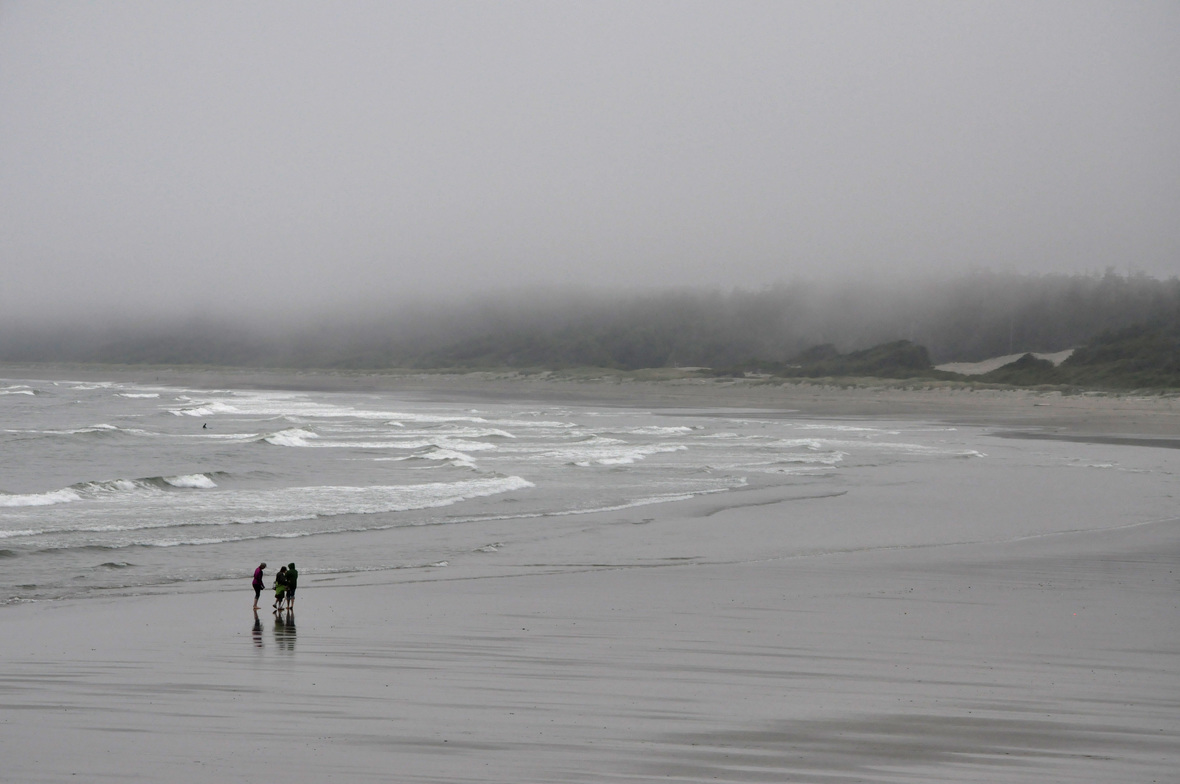 For a vacation a few years ago I went to the west coast of Vancouver Island for a few days and stayed at a place right on the beach near the town of Tofino.  I have been there a number of times before, but each time I go I am taken aback and almost at a loss for words by the sheer beauty of the place, and the way time and the hand of God have crafted this natural and sacred place.  The way that the green mountain peaks stream down and the way that the rain forest meets the beaches and the constant and peaceful rumble of the waves leaves even a native west coaster such as my self wonderstruck and inspired.

Most of the times I have been to Tofino it has rained and this is no great surprise as it has one of the highest average days of rainfall per year of anywhere on earth.  It is a rain forest after all and Tofino comes by that name honestly.  This past visit however it was sunny everyday except for one.  This one exception started with overcast clouds and as I was sitting on my little balcony over looking the Pacific Ocean a mist started to fall.  It was a true mist; not rain but the tiniest of droplets of participation that seem to float down and move with the wind and land on your face and skin in a most pleasant and refreshing sort of way.  It was a true mist, the kind we get only ever so often in Vancouver, the kind that seems to still and soften and calm the earth.

As I stood there on that balcony and could see the mist swirl around the evergreens off to the side of me and ahead I could see a man walking his dog on the beach.  It was early in the morning and we were seemingly the only two people up in that part of the world.  The man was far enough away that I could not make out his face and I assume he could not make out mine either, but we saw each other and almost simultaneously waved at each other.  I don’t know if it was the mystical effect of the mist or the silence punctured only by the waves of the sea or that we were to all appearances the only souls sharing this moment – or perhaps it was all three – but in that moment I felt an incredibly strong human bonding to that man walking his dog.  I had never seen him before as far as I could tell, and likely would never again, but I felt a strong kind of connection for that stranger that I don’t imagine would have happened if we had met eyes and brushed by each other on a busy downtown street in Vancouver.  As that moment passed I had a thought I have had many times before, but I don’t think ever with such clarity and might.  As that moment passed I thought to my self that as a people, as a human community, as an earthly body of individual and yet connected human souls we could, if we wanted to and with God’s help, accomplish anything we set our minds to do.  I plainly thought and perfectly believed that fundamental change is possible on a global scale, change that would make our world more equitable, more peaceful, more joyful and more loving.

In the section of the Letter to the Romans we heard today St Paul says something that I think is pivotal in our connection with God and what it is that gives meaning to us as human beings.  Let me paraphrase carefully what I think Paul says, “I appeal to you therefore, brothers and sisters, to present your bodies as a living gift, holy and acceptable to God, which is your spiritual worship”.  Paul says to us, in fact Paul appeals to us, to let our bodies be a living gift to God and we accomplish this in the worship that we do.  It is interesting, isn’t it, that Paul wants us to use our bodies, indeed to give up our bodies in our worship to God.  What do you think he means by this?  I take it fairly literally.  I think Paul wants us to experience God in worship to the fullest extent that we can.  Think about God, discern mindfully what God is saying to us of course, but also to feel God in the center of our being.  In another church I was at whenever the liturgy moved to music a young man at the back would always dance and move to the sounds.  I think in a very real way he had got it right.  Now don’t worry, I know that we are all Anglicans here and I am not going to suggest that we all start dancing in the pews.  However, I am very much suggesting that we allow our heart and indeed our gut and our inner soul to be touched by God’s message and to be a part of our response to that message in our worship.  Like the mist I experienced in Tofino, let the Holy Spirit swirl around you and fall upon you and let it calm you and renew you.  Paul is saying be completely involved in your worship of God and remember to bring your body along for the ride.

Then Paul says, “Do not be conformed to this world, but be transformed by the renewing of your minds, so that you may discern what is the will of God”.  Paul has just said that we should open our selves completely, including our bodies, to the reality and presence of God, but now he is saying true transformation of ourselves and the world will come through the transformation of our minds.  When Paul says do not be conformed to this world he is saying do not fall into the trap that we have to accept the world as it is and that we have no control in changing it for the better, in changing it to the will of God and making the world more just and more equitable, more peaceful and loving.  He is saying we do not need to live by the standards that this world puts in front of us; we do not need to pursue wealth and power and live beholden to the institutions that say our happiness depends on the size of our wallet and the amount of stuff we can buy despite the cost to the environment, despite the plight of children working in third world sweatshops, and despite the fact that the gap between the wealthiest and the poorest among us is ever widening.

Paul says we can do this, we can separate ourselves from this world by transforming our minds, and we do that by discerning the will of God, and for us as Christians that means following the way of Jesus.  This would mean living in a loving and caring community of equals that care about and do something about the needs of the marginalized, the poor and the oppressed.  Paul is saying that we should let the teachings of Jesus seep into our minds and let the message he brings, the good news that he brings, transform the way we see the world and the way we view all others in this world.  I don’t think Paul is underestimating what he is saying here.  He is talking about revolutionary change on a global scale and that change starts with the transformation of the individual mind that says love and nothing else will be the principal guide in my life; it is the transformation of the mind that says I am my brothers and sisters keeper and to the extent that they are suffering or in need so are we all, and so we all must act.

The anthropologist Margaret Mead once said, “Never doubt that a small group of thoughtful, committed citizens can change the world. Indeed, it is the only thing that ever has”.  Jesus gathered around him a small group of uneducated fishermen and sinners and social misfits and just ordinary people and started a movement.  As we heard in the Gospel today at one point Jesus asks of them, “Who do people say that the Son of Man is”?  They answer with the various names and titles that have heard and then Jesus asks them, “But who do you say that I am”?  Simon Peter answers, “You are the Messiah, the Son of the living God”.  Jesus answers and says you Peter are right and upon this fact, upon this rock I will build my church, and then Jesus says nothing can prevail against it.

If we open our whole being to the fact that we are instruments of God’s love here on earth we are making a decision that through us, in the ways in which we can and in which we are able, all things are possible.  The connection I felt with that man, that stranger walking his dog on the beach in Tofino was real and in a way transformational for me.  Saint Paul says, “Do not be conformed to this world”.  Do not limit yourselves to what seems to be the norm, what seems to be the unchanging way of the world that gloriously rewards the powerful and rich beyond reason, and disgracefully steps upon and ignores the weak and the powerless.  Let us transform ourselves by being open in body, mind and soul to the messages of God and the teachings and the ways of Jesus.  If we do so we build upon the rock that Jesus made as His foundation.  Who do you say that Jesus is?  I say the Son of the living God who calls us to love one another, and in that love we are transformed.

What has always struck me about being open to this transformation is that as we give of ourselves to others, as we care for those who cannot care for themselves we start a journey that will lead us to a greater joy and peace than we had known before.  It is as though there really is a greater plan.  That moment of clarity that morning in Tofino reminded me of the beauty and the power of the way of Jesus.  Who do you say that I am?  I say the way to all possibilities.  Amen.