Why Look For The One Lost Sheep? 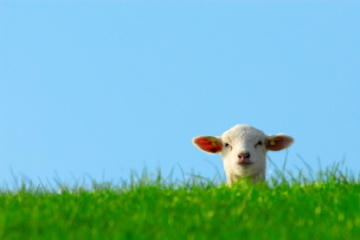 The two short parables we heard from Jesus in the Gospel today are among the most well known parables in the New Testament. Indeed the only two that people might be more aware of would no doubt be the Good Samaritan and the one that immediately follows today’s reading, that of the Prodigal Son. Interestingly the writer of Luke puts The Lost Sheep and the Lost Coin and the Prodigal Son together – one right after the other. And as I mentioned we are all familiar with these stories and know what they represent. All three of these parables of course speak of the joy in finding something that has been lost. But I always remind myself to take a very careful reading of the parables of Jesus, because it is very rare indeed that He conveys a single message, a single meaning or a single lesson. The parables of Jesus tend to have multiple layers of significance and nuance. Even in what would appear to be the simple parables before us of the Lost Sheep and the Lost Coin, there is great depth of meaning and perhaps even a couple of surprises.

Why, you might ask, does Jesus do this? Why does he so clearly make a woman represent God? One of the remarkable ideas, one of the remarkable credos about the early Jesus movement, or ‘The Way’ as the early Christians called themselves, was their inclusion of women into the reality and the history of the movement and their belief in the equality of all persons including men and women. St Paul’s declaration that, “There is no longer Jew or Greek, there is no longer slave or free, there is no longer male and female; for all of you are one in Christ Jesus”, was not just a slogan, it was not just a whimsical notion, it was an ideal to live by and perhaps even to die by.

In part the idea of God being both male and female is because of the early movement’s close lineage to ancient Hebrew theology. The early Christians felt it was blasphemous to self confidently assert that God was solely male or female. And in the early church there was a strong sense of equality. Mary Magdalene is referred to in early Christian writings as "the apostle to the apostles." In apocryphal texts, she is portrayed as a visionary and leader of the early movement, who was loved by Jesus more than the other disciples. In fact in the first three hundred and fifty or so years in the church it was much more probable than not that the priest presiding at a home Eucharist was a woman.

So why did Jesus choose a woman as God in the Lost Coin parable? In part I think because Jesus had no hang up about picturing God as either gender. In part I think it was to balance the three stories about God, recalling that it was important to the early Christians not to view God as uniquely male or female. But, I also think it was to shake us out of our familiar assumptions and to put a space in our head that would allow the vision of woman as God as well. Indeed it wasn’t until the Roman Empire recognized Christianity as its state religion in 380 AD that the church became formalized and structured in its governance and patriarchal in its nature.

The second surprise is a subtle one and can be found in a careful reading of the Lost Sheep parable. The Gospel of Luke says that the ninety-nine sheep were left in the wilderness in order that the shepherd could go and look for the one lost sheep. I would venture that, as an old Gospel song tells us, most people believe that when the shepherd goes searching for the one, the other ninety-nine are safely sheltered in a fold or an enclosed pen. But this is not the case; Luke makes it clear that the shepherd leaves the other sheep in the wilderness. For a moment let us take a look at what this means.

So why does the Shepherd leave his ninety-nine sheep in the wilderness and go look for the one that is lost? If the other sheep were safe it would make some sense. The shepherd in this case would be frugal and prudent. With the balance of his livestock secure he would risk nothing by leaving them and finding the one lost sheep. However, in this parable the shepherd is either foolish or loves the one lost sheep so much he is willing to put all the others at risk and, one might presume, even risk his own life and livelihood. Why does the shepherd risk so much for this one wayward sheep? Why does the woman look so earnestly and never stop looking until she finds the one coin? In both cases and seemingly against logic and all odds, God keeps looking for the lost one. What is so special about this lost one? What about all the others, don’t they deserve God’s attention as well?

Herein we find the depth of these two seemingly simple parables. We are all, every single one of us, at one time or another, to some degree or another lost – and not just lost, but also lost in the wilderness. The popular physiologist writer and author M.Scott Peck in his groundbreaking work, ‘The Road Less Traveled’ opened his book with this short sentence. “Life is hard”, period. And it is hard – not for all of us all of the time, but for all of us at least some of the time, life deals us blows and body checks that lay us flat and make it difficult to pick ourselves up again. In these moments we tend to distance ourselves from others and from God. To one degree or another we remove ourselves from our normal life and look for refuge, for meaning, for solace or for escape from somewhere else. To one degree or another, because of our particular hurt, we become a little lost.

It happens to all of us, whether or not we have family and friends to support us or whether or not we have faith in God – it happens to all of us and we get a little lost. At some point most people begin to slowly recover their lives and step by step find their own way out of the wilderness and into the light of the world. But there are many who do not. There are many who because the trauma was so deep or the hurt so large or the dilemma so complex that they cannot find a way out. Or it may be that they do not possess the cognitive tools or the social support they need, and they to get lost in the darkness and stay lost in the darkness. This is when many of these people turn to drugs or alcohol or some other addiction that for a short time takes the pain away. More often than not these people become increasingly lost and eventually loose hope altogether.

But, there is one thing that binds all of these people together. There is one thing that all of us, when we are in this situation and to whatever degree we are in it, can rely upon. There is one deep, remarkable, never-ending and implausible truth; that when we are lost God is looking for us, and the deeper into the wilderness we are, the longer and harder God will try to find us. When we are lost God never, never gives up trying to connect with us and lead us into the light of love. I believe God is trying to save the drug addict, as lost as she or he may be, all the way to the end; and even in the end if their life is lost, God is the first one there to hold them in Her kingdom and say welcome home. God does this because He loves us so much He is willing to risk anything to save us. Perhaps God is foolish to love us all this much, but rest assured, She does.

At the end of all three of these parables there is a celebration because what was lost is now found. In all three of these celebrations everyone is invited over to enjoy the good news and share in the good fortune. And why is this? At the beginning of these three parables Jesus is accused by the religious authorities of inviting sinners of all sorts to sit around him at the table. But again if you read the passage carefully it is not Jesus who is inviting these sinners to His table – these so called sinners are being drawn to Jesus and inviting themselves. The lost, the lonely, the outcast, the hurting, the sick, the grief stricken, the abused, the hungry – all of them are being drawn to the light of the love of Jesus – and then Jesus tells them these three parables. They are told that God loves them so much that God might do foolish things to protect them and hold them in Her love. They are told that God loves all of us that much and that He will never, never let us go. And all those lost souls hearing Him believed Him. And then there was a celebration, of course there was a celebration – why on earth wouldn’t there be one? Amen.