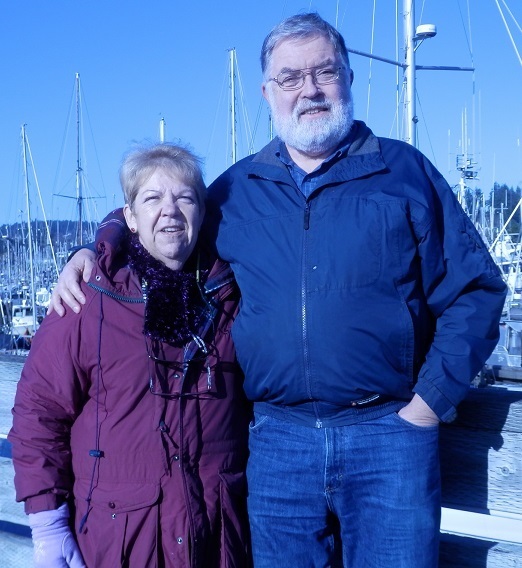 It is with great sadness that we annouce the death of our sister in Christ Janice Lupton.  Janice and Brock met and were married at St John's.  Brock has written a wonderful note about their life together and I would like to share that with you all.  May Janice rest in peace and may the light and love of God hold her forever.

Do not stand by my grave, and weep.
I am not there, I do not sleep—
I am the thousand winds that blow
I am the diamond glints in snow
I am the sunlight on ripened grain,
I am the gentle, autumn rain.
As you awake with morning’s hush,
I am the swift, up-flinging rush
Of quiet birds in circling flight,
I am the day transcending night.
Do not stand by my grave, and cry—
I am not there, I did not die.
- Clare Harner Lyon (1934)
Janice asked specifically to have the above poem used somehow in any celebration of her life.  This celebration was held at St. Peter’s Anglican Church, Campbell River, BC at 11:00 am on May 25, 2021 with the Reverend Dr. Cathie Hall and the Reverend David FitzSimmons.
Janice was born in Edmonton on September 4, 1947. She had been in hospice in Campbell River (Yucalta Lodge) for 7½ months when she died on Sunday, May 21, 2021 at 8:15 pm.
She had been on kidney dialysis (mostly at home) for about a year.  It was an invasive way of life: our apartment was full of up to 40 boxes of various supplies and the cycler sat on a table in the living room. Janice spent 12 hours a day connected to this machine: she slept in a reclining chair, as lying in bed was both painful and impractical (the bedroom was too small for all the equipment)
Her eyesight began to deteriorate (macular degeneration, nothing to do with kidney failure), she was for some months in danger of amputation of one foot due to poor circulation caused by diabetes, and diabetic neuropathy caused extreme pain in feet and sometimes in lower legs. For these reasons, she decided in October 2020 that her quality of life was such that she wanted to discontinue dialysis. This of course was a terminal decision.
She spent quite a few years working at the BC motor licence office. Then at age about 50, she fulfilled an ambition by earning a Master’s degree in First Nations’ Education at Simon Fraser University and a TESOL (Teach English to Speakers of Other Languages) certification and began a second career as a teacher of adults, an advocate for the people of Canada’s First Nations, and a mentor and guide to many students as an academic adviser at Simon Fraser University.
In her spare time (!) she was a visionary and at times even a dreamer - she wrote poetry, sketched, and had a head full of craft ideas. Spare time was very little indeed what with working and being a supportive single mother to Aaron and Christian after an unhappy first marriage.
She and Brock met at St. John the Evangelist in 2005-6. Dan Meakes, a mutual friend, invited us both to worship there. Neither of us was in a very good space. I was struggling as a single parent of 4 teenagers (their mother Sharon had died in 1994) while underemployed in a second career as a school music teacher. She was finding her position at SFU unrewarding and was living in a very small apartment in Burnaby. Both her sons had left home. Janice says she noticed me when she first came to St. John’s. After joining the choir, she also says she set out to get to know me. By her account, that was not easy. (I can believe it!)
In the last 14 years of her life she was an affectionate wife to Brock. She was “Grandma Janice” to Nathan (Aaron’s son – now an adult) and to Chris’ children Autumn and Hudson and had a special relationship with two girls she particularly treasured among the members of her extended family, Autumn’s sisters Summer and Ashley. She once described herself as an “edgy grandma” and was a firm believer, with a twinkle in her eye, in the notion that “well-behaved women seldom make history”.
Her vigorous contests with one of the nursing staff as to which of them could sing louder in Dolly Parton’s “Jolene” were a source of smiles and laughter, as was her sometimes sly sense of fun.
Cathie Hall, parish priest of St, Peter’s Anglican Church (Campbell River) was a friend to Janice and Brock, bringing the kind of attentive pastoral care which anyone would treasure. Alastair Hunting, friend and pastor, was and is a source of spiritual support, comfort, and strength.
Nathan took the opportunity to visit his grandma near the end of her earthly life. Aaron and Chris spent many an hour, as did Brock, sitting at their mother’s bedside in the hospice unit at Yucalta Lodge during the weeks of her final illness. She was a friend to many of the extraordinary nursing staff as they gave her the best of compassionate and skilled care during the 7 months of her struggle. There are no words sufficient to thank these caregivers.
Her friends at St. Peter’s Anglican (Campbell River) and Comox United churches share with those of St. John the Evangelist (North Vancouver) and with Aaron and his long-time partner Jackie, Chris, Brock, Hudson, Autumn, Nathan, Summer, and Ashley in sorrow at Janice’s death and in rejoicing for her life well-lived.
Thank you Brock for this wonderful tribute to Janice.
The Rev. Patrick Blaney