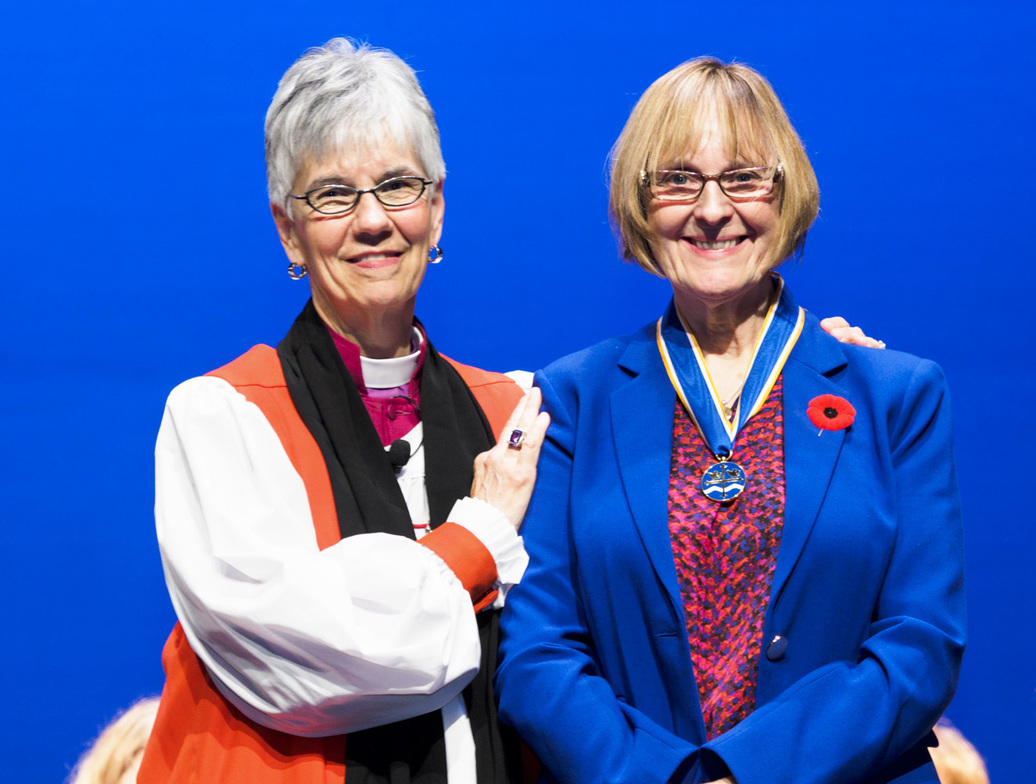 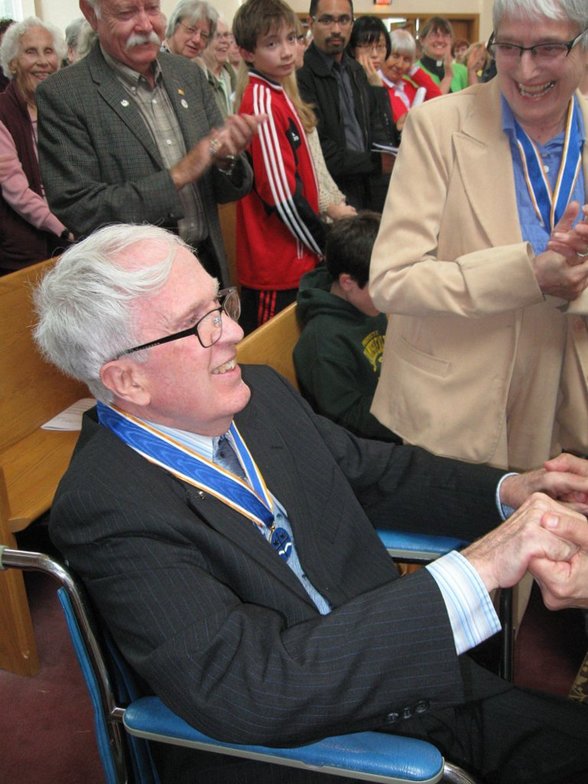 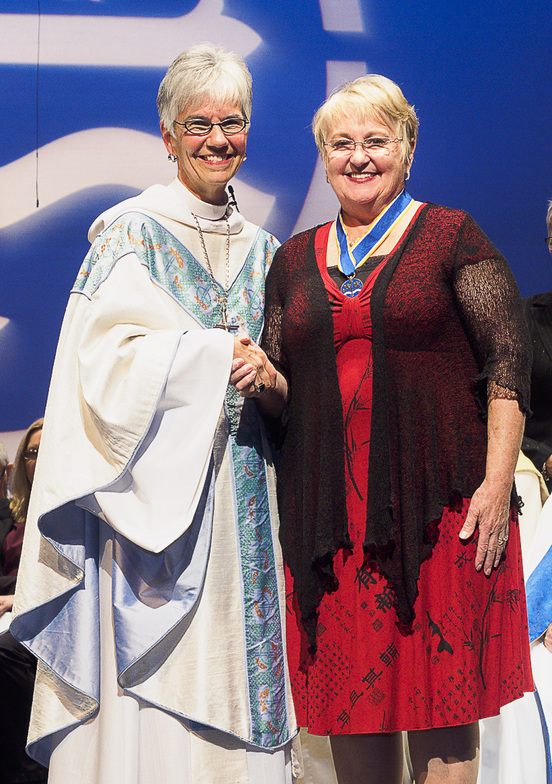 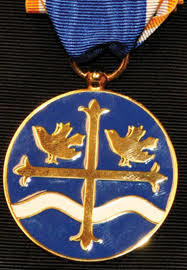 Order Of The Diocese Of New Westminster

Order Of The Diocese Of New Westminster

What is the Purpose of the Order?

The purpose of the Order is to honour and give special recognition to lay members of the Diocese who have given outstanding service over a significant period of time in their volunteer ministry. The Investiture Service takes places every other year.

What are the Eligibility Criteria?

When is the Medal Worn?

The medallion is to be worn around the neck on the special blue, white and gold ribbon. It is appropriate for members of the Order to wear the medallion at special occasions, in parishes, or at the Diocesan level. Examples of this would be a worship service or event where the Bishop of the Diocese of New Westminster is present, at Synod or Diocesan Services & events and at the installation of New Members to the Order.

In addition to the medallion the members of the Order are given a small lapel pin that can be worn with everyday dress.

Background on the Insignia

The insignia for The Order of the Diocese of New Westminster (ODNW) is a round medallion featuring the official badge of the Diocese in full coloured enamel struck by Pressed Metal Products of Vancouver. The badge was granted by the Chief Herald of Canada on May 15th, 2007. The colours and many of the symbols on the badge are derived from the coat of arms of the Diocese, granted more than half a century ago. The colours blue and gold are the main colours in the coat of arms and in the badge represent both heaven, and the sea and the riches of the Spirit. The Christian cross takes the form found on the medieval coat of arms attributed to St Edward the Confessor and long associated with Westminster Abbey. In the badge another symbol of St. Edward, the small birds, are given a Canadian flavour with tails ending in a maple leaf shape, fitting for a Canadian Anglican diocese. The wavy white line symbolizes both the ocean and the river which surround much of the Diocese as well as the waters of baptism.

St. John's Inductees To The Order Of The Diocese Of New Westminster

2010  The late Ms. Audrey Halsey.  (Audrey’s award was accepted on her behalf by Ms. Ann Bodwell) Audrey was an active member of the parish from 1992 and served in many different positions. She also spoke at several churches in the diocese about her experience nursing in the North and in Sri Lanka. Within the diocese, Audrey was also very active in the VST Auxiliary (now the Friends of VST).

2012  Mrs. Lesley Philbrick.  Lesley joined St. John’s in 1995 when she first arrived in Vancouver from England. Until 2010 she worked full time as a nurse while being a very active member of St. John’s. She served on many committees and participated in any activity the church was involved in. Lesley died earlier this year and her husband Gerald Philbrick will accept the award.

2013  Mrs. Ann Bodwell.  From Ann’s arrival in Canada in 1960 she has been active in all aspects of parish life. In addition to her commitment to the parish she has been a dedicated supporter of VST. She is recognized as a dedicated and stalwart leader at St. John’s.

2013  Mr. Bruce Bodwell.  Bruce’s dependable practice of faithfulness, stewardship, hospitality and caring has shown great leadership and encouragement to parishioners of all ages, for many decades. He has offered particularly strong and vital leadership in his role as Parish Treasurer in times of crisis.

2014  Mr Robert (Bob) David Hardy Bishop’s Nominee.  Bob has been a lifelong member of the parish of St John the Evangelist, North Vancouver. He has been a member of the Junior Choir, sidesman, acting caretaker and grass-cutter, reviewer of annual financial statements, member of church council, offering counter, Treasurer, and a delegate to Synod. In 2012 he became a member of the Finance Committee of the Diocese, and at Synod in 2013 and 2014 he was elected and re-elected to the office of Treasurer of the Diocese.

Mrs. Allison Mulligan.  Allison has maintained an active and dedicated practice of Faithfulness, in Stewardship, Hospitality and Caring Ministries at St. John’s for more than five decades. Her service has evolved over the years as a true “labour of love” and she has contributed countless volunteer hours not only to the Parish, but also to Camp Artaban during the 1980s and 1990s.

2015  Ms Carolyn Eva Iker.  Carolyn’s faith, rooted in contemplative prayer, guides her as a liturgical deacon, Eucharistic Administrator, intercessor, guest preacher and prayer warrior. Carolyn has mentored others through silent retreats, a meditation and spirituality group, and major conferences on women’s leadership and spirituality and health care. Throughout her nursing career, Carolyn has bridged the health sciences and spirituality using her gift for prayerful insight for healing those in spiritual and physical need.

2016  Mrs Linda Joan Harrison.  Linda is a cradle Anglican. She has been a more than capable leader and champion of the parish of St John the Evangelist since 1998. St John’s and the deanery have been blessed by her dedication and spirit as she served as Warden for several terms, participated in two canonical processes, revitalized the Hospitality and Fellowship Group, organized church refugee sponsorship programmes, created outreach programmes to the neighbourhood, hosted international choirs, participated in Caring Ministry and much more.

2018  Ms Madeline May Cooper.  Madeline consistently demonstrates caring and compassion while being guided by the principles of her dedicated contemplative prayer practice.  Madeline’s 30 year ministry at St John’s includes Altar Guild, counter, Treasurer of the Women of St John, nursery, seniors’ luncheons, and initiating and leading the Prayer Shawl ministry.  She is especially recognized for her leadership and devoted service in Caring Ministry, administering communion and assisting elderly parishioners in life changing transitions.  Madeline’s caring ministry gives significant value to people’s lives and to the parish.

We at St. John's are very, very proud of our ODNW Inductees.  We congratulate them on their achievement and thank them for their many years of dedicated service to our community.